A Letter from Salonika

Francis Betts was the son of a Welwyn publican, William Betts, landlord of The Boot on the corner of Mimram Road and the High Street, now Country Properties Estate Agents.

Francis had already served in the South African War when he re-enlisted into the Army Post Office Corps in March 1913. He was one of the first to be sent to France in August 1914 and soon after he was promoted to Sergeant. He served in Salonika from 1916 to 1919 after which he was demobilised.

In 1916 he was in Salonika serving in the Postal Section, Royal Engineers and wrote to his uncle in Hertford to tell a little of his experiences.

“Just a line to thank you for the cigarettes. The rain was pouring down when the packet arrived and we sat discussing different aspects of the war: so of course the packet had to go all round and the boys smoked to your good health. Things here are very quiet; nothing doing at present. A Zepp came over last week and dropped a few souvenirs at 3 a.m. I heard his whiz but was too snug in my blanket to get up. It was making things pretty warm and made towards the docks, doing considerable damage. The weather continues very cold and the wind drives over the mountains and sweeps the valley, fetching down some of the tents. I cannot recommend this place to spend one’s holiday in. I sahll be glad when it’s all over. Fancy being sent out to this unearthly place after doing 18 months in France. The troops there get papers and other little luxuries, also a few days leave every now and again, but things are different here”

‘The Boot’ was halfway down the

High Street on the right hand side. 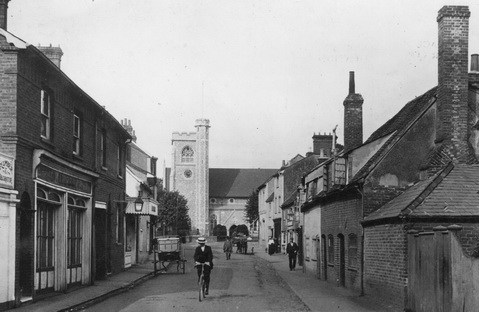